A Blunder of Bemusement to Behold 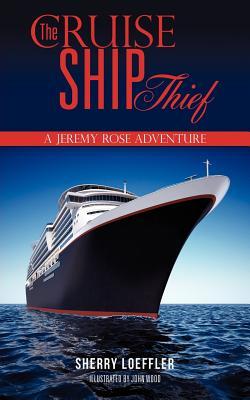 It was early and the umbrellas hadn’t been put on the tables, but were stacked against the wall in mid deck. When Mr. Tremble got up I slid under the leaning umbrellas to observe him without anyone seeing me.

He snatched something, putting it in a large pocket on his baggy pants. I had him this time. I was so excited I started to stand up, bumping my head on an umbrella, then tripping over an umbrella on the floor, and sliding in a puddle of water.  My legs wouldn’t do what I wanted. I just slid on the floor with umbrellas tumbling down around me. I tried to get out, but my feet couldn’t move over the umbrellas. I lost my balance.
Above me was a storage cage, so I reached up to grab the door, which hadn’t been closed properly, and out came the balls, flutter boards and play stuff – all on top of me. I slid over a bit, landing at someone’s feet. When I looked up, it was Mr. Tremble. He looked mad. He shook his head at me, mumbled something, and walked away, but I noticed two bulges in the pockets on his pant legs.
All I could do was sulk away. My suspect was gone and I had no proof of what he’d done.  The galley staff laughed at my antics. My face was burning and I was so embarrassed.
–
*    *    *
Be sure to join Sherry at the JUZDIZRTS Author Event were she will read from her novel at On The Bean coffee shop in Aurora this Saturday April 26th, starting at 3pm.

Sherry Loeffler is a Canadian writer living in Stouffville, Ontario. She has self published two children’s picture books – BUSY BUZZING BEES and AMBITIOUS ANTSY ANTS. She has published two adult mysteries featuring Tiffany Rose, Jeremy’s mother. Sherry has done children’s programs in her church for many years and has published a Christian children’s book THE GUARDIAN ANGEL: the life of Jesus as seen through the eyes of His Guardian angel. Sherry has two children, Tim (wife, Diana) and Hollie, five grandchildren, Kristi, Kyle, Jean-Marc, Victoria and Noah. She also has one great-grandchild, Chloe. She has always wanted to teach children and loves being around them.  She also wants to see more good, moral books on store shelves to  help children develop into moral adults.

THAT DREADED ‘C’ WORD – A non-fiction book about our journey with Cancer.

HOW NOT TO LOSE A LIBRARIAN – An adult mystery, the second in the HOW NOT TO series.

THE GUARDIAN ANGEL – The life of Jesus as seen through the eyes of His Guardian Angel.

GOD LOVES THE CLOWN IN ME – The story of my ministry in clowning and magic to teach children.

Jeremy Rose is an adventurous nine year old boy, the son of Tiffany Rose, Chief Librarian on the cruise ship SEAFARER’S MEMORIES. Their Uncle Dexter Conlin is the captain of the ship and he allowed Jeremy to come aboard for the summer to help his mother and to learn from the experience. Their first cruise is to Mexico. A cruise to Alaska follows the next month. Jeremy is excited, but not ready to discover a thief on board. As he says, “Who would believe a nine year old kid?” He learns a lot about Mexico, archaeological digs, treasures as well as a special gift he had which came from God. Enjoy his adventure with him.

“I believe the JUZDIZRTS Author Event is a great way to promote authors and let the community know there are authors among them. I was honoured to be a part of one event last year and it encouraged me, as an author, to continue writing. More people should help authors showcase their books and novels. I appreciate Melissa helping authors in this way.”
—

The Newmarket JUZDIZRTS Author Event is less than 24hrs away.  You have had an opportunity to read about each author here on the official blog website and read an excerpt of their writing.  Now is the time to show your support in person if you live locally to the event.  We can’t wait to meet each and every person who has been following our progress these last few months.

Should you be unable to attend due to time or distance, know that we carry your dedication with us in our hearts as we make tomorrow and event to remember.

Here is the official line up for the hour of readings:

Our free door-prize draw allows each attendee one free ticket with a minimal donation request of $1 for additional tickets.  The draw is sponsored by Covernotes Tea & Coffee House and The Writer’s Community of York Region along with each participating author.

Don’t forget to stay for a chance to meet and talk with the authors immediately after the readings. 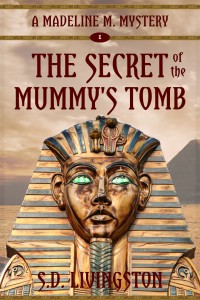 Take a moment to savour this mouthwatering morsel

Excerpt from The Secret of the Mummy’s Tomb:

Clammy shivers gripped Madeline’s spine. She turned back to the boy but he still lay flopped on his back, catching his breath and wiping sweat from his dirt-streaked face. She turned to face the long stone box. With reluctant steps she crossed the room until she stood next to it. Slowly, hardly daring to look, she forced her eyes downward. Past the half-open lid, into the shadowy corners—and straight into the face of an Egyptian mummy.

Her voice came out as a startled croak.

Behind her, the boy’s voice seemed very far away. “That’s Shefret,” he said, still out of breath. “This is his tomb.”

It took Madeline a long moment to stop the shaking in her legs. “But mummies are supposed to be old,” she said in a dazed voice. “And this one is—it’s fresh!”

She tore her eyes away from the box to stare at the boy. Her face was a pale, frightened blob in the gloom.

He was sitting up now, looking far more cheerful than Madeline thought he ought to in the circumstances.

“Egypt, near as I can tell,” he replied.

“I know that.” Madeline swallowed. She hardly dared ask the next question. “What I meant was—when are we?”

Sherry Loeffler is a widow living in Stouffville, ON, Canada. She has two children from her first marriage – Tim (wife Diana) and Hollie. She has five grandchildren – Kristi, Kyle, Jean-Marc, Victoria and Noah as well as one great-granddaugher, Chloe. She loves to read and write mysteries, having begun both as a teenager. She decided to put Frank’s (her husband) story in writing to inspire people and give them hope. This is her first non-fiction book. Although her forte is fiction, both adult and children, she is planning on writing another book on the effects and aftermath of living with cancer for 5 1/2 years.

THAT DREADED ‘C’ WORD – A non-fiction book about our journey with Cancer.

HOW NOT TO LOSE A LIBRARIAN – An adult mystery, the second in the HOW NOT TO series.

THE GUARDIAN ANGEL – The life of Jesus as seen through the eyes of His Guardian Angel.

GOD LOVES THE CLOWN IN ME – The story of my ministry in clowning and magic to teach children. 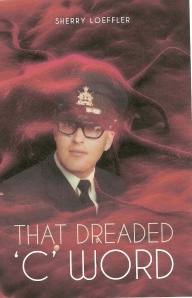 From Chapter One – THAT DREADED ‘c’ WORD:

August 2005
My dear husband,
One horrible Wednesday morning I picked up to phone to hear a doctor tell me, “Your husband is seriously ill.I have to operate, but I don’t expect him to come off the table alive.If you want to see him you have to be here within 1/2 hour.”
I cried. We had plans. We wanted to travel. We wanted to grow old together. I didn’t know what to do.

I was upset and mad at the doctor for being so uncaring. My anger grew when I found out he had told you that you were not going to live through the surgery.
How could he be so unfeeling? People told me he wanted to be honest; he wanted to let me know how serious the situation was; that he didn’t want to mislead me. It was cruel and, I believe, unnecessary. He could have worded it better; He didn’t have to terrify me.
Neither of us knew what the future held, but we did know that the doctor was not ultimately in charge, God was.There was a lot of prayer going up for you that day.
—
“I’m thrilled to be a part of JUzDIzRTS first author event. It’s exciting and I’m pleased to promote my first non-fiction book and spread the story of our experience of faith, hope and love. I’m hoping for a great turnout and to meet lots of new friends.”
—
Facebook: https://www.facebook.com/sherrykerrloeffler

S.D. Livingston found her niche after publishing in several other genres. Her first novel, a historical romance, was published by Avalon Books in 2008. She soon followed that up with two self-published books, including the political thriller Kings of Providence.

But her literary heart really belongs to the stories that enchanted her as a kid, and there’s nothing she enjoys quite like working out the twists and turns of a spine-chilling mystery for young readers.

She’s a member of The Writers’ Union of Canada, and lives in Newmarket with her husband.

S.D. Livingston will be reading from the first book in her new middle-grade series, The Secret of the Mummy’s Tomb.

On a creaking, windblown night, 11-year-old Madeline Mott’s dad disappears from the museum. He’s the Keeper of Unusual Items, so it’s no surprise that she finds a strange amulet on his desk. And when the amulet jolts her deep into the past she soon discovers where her dad’s gone—to ancient Egypt!

But she won’t have much luck finding him if she can’t get rid of Jack, a street urchin whose talent for picking pockets leads Madeline to discover it was the same amulet that swept him into the past, too.

He insists that Madeline can help him get back to Victorian London, and when the pharaoh’s palace turns out to conceal a startling secret, it might just be the clue to the entire mystery.

This is the first book in the Madeline M. series, and it launches Madeline and Jack on their time-travel adventures in an ancient land full of mummies, tomb robbers, and man-eating crocodiles. For readers 8-12.

“The JUzDIzRTS events are a perfect example of the right place finding the right time. Today’s local writers are on their way to being tomorrow’s bestsellers. What better way for readers to discover them, and for authors to connect with their audience? It’s a winning combination all around—with a great cup of coffee on the side!”

The Writers’ Union of Canada: http://www.writersunion.ca/member/sandra-livingston